State of Influencer Marketing in Sweden 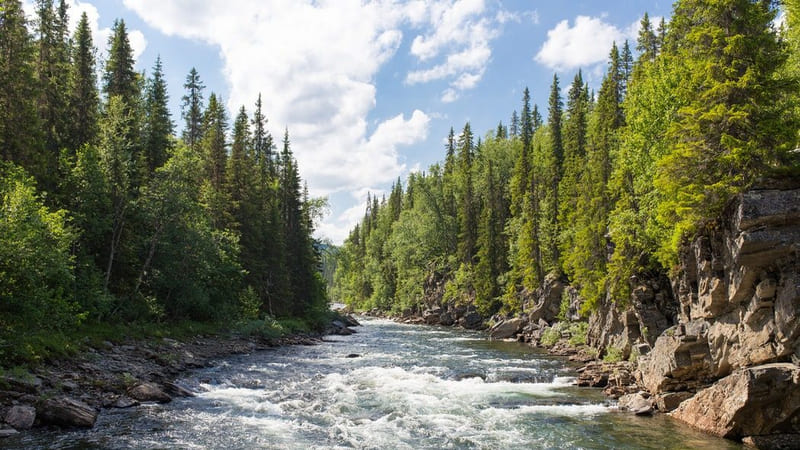 With its 1 billion monthly active users (June 2018) Instagram becomes not only one of the leading social networks but also the most important platform for Influencer Marketing.

In this report, we will provide you with the most current Instagram influencer's insights and benchmarks and give a data-driven look into the dark side of fraud schemes, that are used by Swedish influencers to fake popularity and get more money from brands.

We break down influencers into five main influencer tiers by the number of Instagram followers.

They often have a very mixed audience with various topics of interest. Their relationships with them are more distant compared to other groups of influencers. They have the biggest reach but the lowest trust.

They are famous in a local community, you can think of them as a “mini-celebrity.” Their content is usually high-quality and is comprised of a certain passion or topic.

They have a more niche audience that is highly engaged with a deeper connection. Micro-influencers present in almost any sector: health and fitness, food, entrepreneurship, fashion, and beauty to name just a few prominent categories.

They are regular consumers who are passionate and willing to share but have little influence.

There are only a few Sweden Mega-influencers so we didn’t get them into account in this Report. The majority of Sweden influencers are Micro-influencers (58.7%). 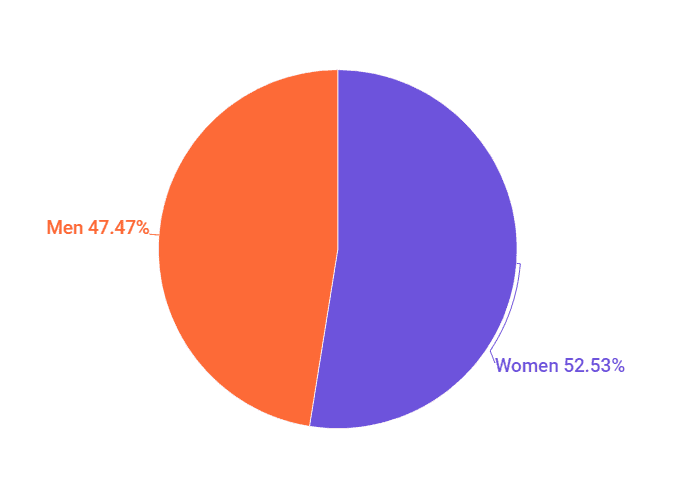 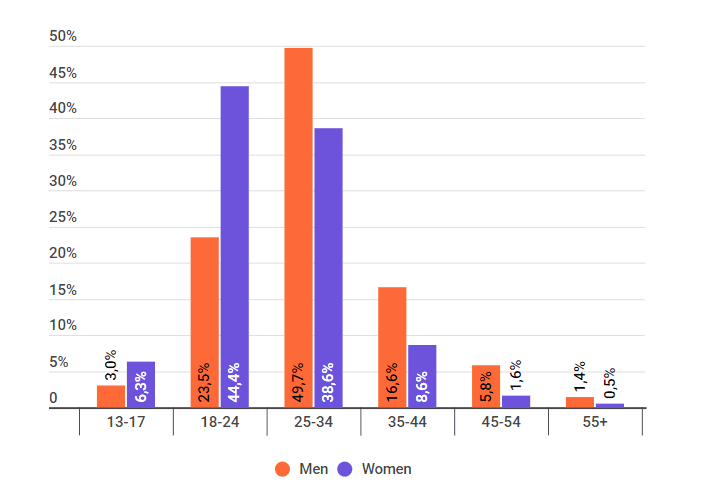 For many marketers engagement are the most important metric and a popular KPI of brand awareness. But what exactly does it mean?

Highly engaging content with many likes and comments often stands a better chance of organically appearing on an Instagram feed. 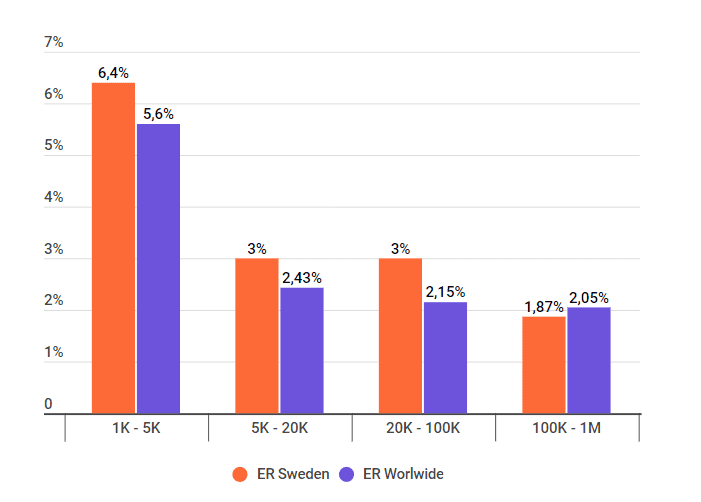 It is also worth noting that the average engagement of Swedish influencers is higher than the worldwide average. Users in Sweden are more engaged in influencers' content. 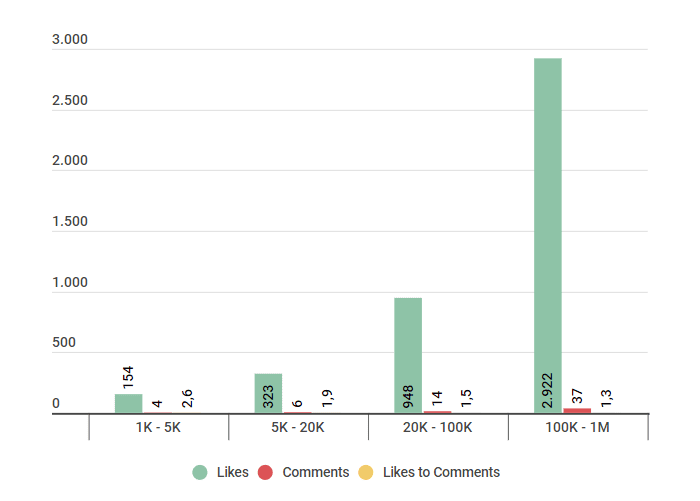 Compare the number of likes and comments between influencers with similar followers number. Pay attention to Likes to Comments Ratio, this metric indicates how strongly an influencer’s followers are involved in a dialogue.

The influencer marketing industry is projected to be worth $5 to $10 billion by 2020 but research shows that a significant number of influencers have falsely manipulated their follower numbers and engagement.

The market growth is directly linked to the cost-per-post value. How much a blogger would charge for a sponsored post hinges on one’s likes averaged per post and number of followers. This is the reason why fraud eventually became a thing: unscrupulous bloggers start buying likes and comments in bulk so that they can grab more money from the brands.

Organic Instagram growth is a long and arduous process. Not all influencers are ready to invest their time and money in it. Besides, there are tons of apps and websites that tempt to get followers, likes, and comments immediately in any amount and with quite a small sum.

The fraud starts when these impatient influencers connect with brands to advertise their products and services. Usually, a brand agrees to pay a fee based on the number of followers the influencer has and ends up wasting their time and money. 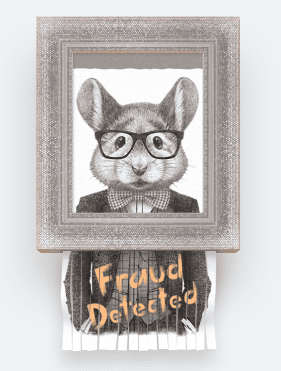 How many Instagram influencers are involved in fraud in Sweden? 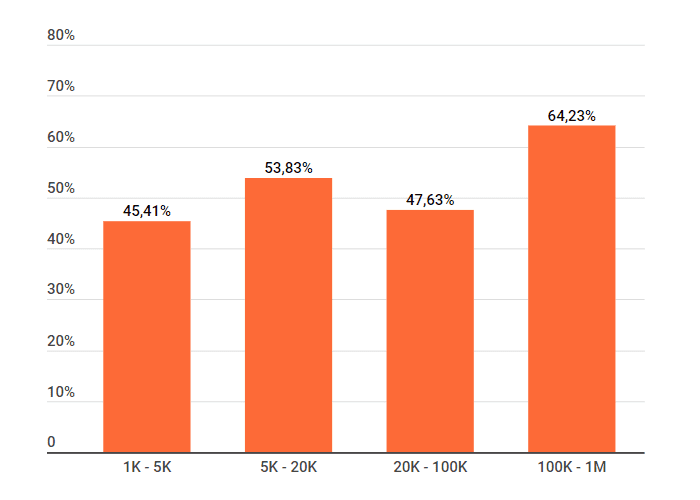 The highest percentage of fraud-free we will find in the group of influencers who have between 1K and 5K followers. 54.59% of influencers in this group are fraud free.

The most controversial is mega influencers and celebrities. Approximately 10% of them artificially inflate their engagement and number of followers, but most of them are just victims of SPAM. We’ll provide details in the following sections.

influencers use special tools and apps for automatic Follow/Unfollow that start following other users based on the filter criteria.

There is a fierce debate in the community of influencer marketing specialists about the usage of follow/unfollow trick. At HypeAuditor we believe this is SPAM. But more importantly, this method is directly prohibited by Instagram.

How does this threaten advertisers?

According to the Instagram announcement, they will artificially reduce the reach of influencers who use third-party applications. Besides numerous articles in the media denouncing such influencers can also have a negative impact on the reputation of your brand.

How to Detect influencers who use Follow/Unfollow?

Just check out the following graph on HypeAuditor, if you see these kinds of spikes it means that this influencer is using mass following to gain new followers. 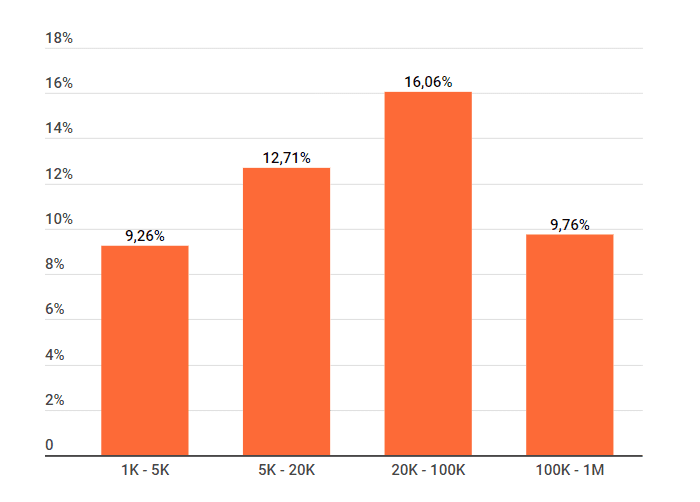 The study shows that follow/unfollow is mostly popular among influencers who have between 20K and 100K followers, over 16% of them use this tactic.

Influencers who use this trick have a bigger percentage of the non-reachable audience, who don’t see their posts, thus they have a lower reach.

Most influencers increase their number of followers gradually. Every month more and more Instagram users are starting to follow them. Some promotion methods, advertising, mentions in media or a shoutout from another influencer could accelerate this growth, but nevertheless, the general pattern remains the same.

However, some influencers do not want to wait and use inauthentic methods to increase their follower's number immediately. Unfortunately, most of these inflated followers are inauthentic.

To detect growth anomalies you should check the Followers graph that shows the dynamics of followers' growth. Analysis of this graph gives a lot of information about the account’s growth patterns and trends and also helps to detect if an influencer has bought followers.

Instagram users with more than 1500 followers are identified as Mass Followers. They use automatic tools for Follow/Unfollow. Mass followers don’t see the influencer’s posts.

Bots, fake or stolen accounts, and people who use specific services for bulk purchases of likes, comments, and followers. 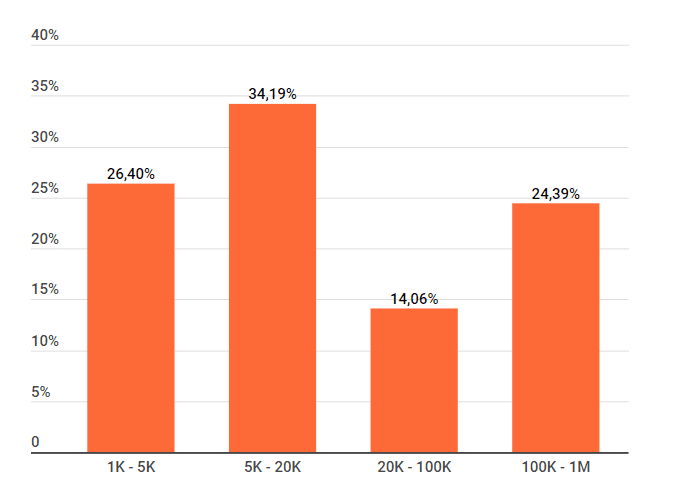 The easiest and fastest way to grow followers number is to buy them. Over 34% of influencers with 5K-20K followers, and over quarter influencers who have between 1K and 5K followers are buying followers regularly.

How many Instagram influencers artificially inflate their comments in Sweden? 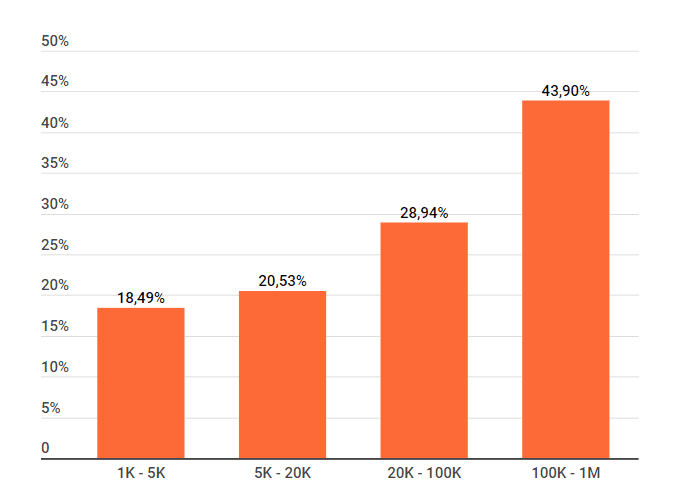 Almost one-third of influencers have inauthentic comments. The biggest percentage of them are on celebrities' accounts. We believe this is not due to their inauthentic actions but due to the overall level of SPAM on Instagram. Most of the spam came from users who use Instagram Comment Tools and Bots. They target their comments based on: hashtags, geolocation, followings of other accounts, and specific account targeting.

There are two main inauthentic methods to boost the number of comments:
– Buying comments.
– Comments Pods (we will look at them in more detail below).

Comment pods (Engagement Pods or Boost Groups) are groups of bloggers collaborating to run up their activity. They often gather on Facebook, Telegram, or other chats. A blogger from such pod would make a post and throw a link to the chat with some comment: “likes, comments (3 words and more), saved.” And then he/she would go up the chat to see the last 10 tasks from other bloggers and carry them out. This method is definitely hard to see with eyes only as there are real people with real accounts and high-quality content, and they would write extended comments.

It’s hard and time-consuming to detect engagement pods manually. To do this, you should check every comment and a follower who left them. If you see that all posts are commented on by the same group of users, it might be a pod. To detect pods at a HypeAuditor our machine-learning algorithm takes into account multiple factors, among them: behavioral patterns, commenter’s content, and the quality of the account that left that comment. 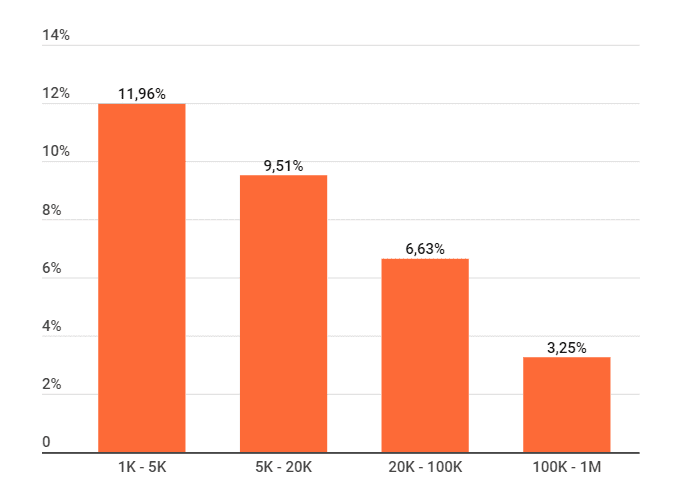 Investing time in Comment Pods makes sense only for small accounts. That’s why this trick is commonly used only by influencers who have less than 20K followers.

11.96% of influencers who have between 1K and 5K followers use Comment Pods.

The report uses data from a wide variety of sources, including market research agencies, internet, and social media companies, news media, and our internal analysis.

We have collected and aggregated open data from a variety of sources: social platforms, catalogs, websites, crowdsourcing, and many more. After that, we processed the data by anonymizing, sorting and structuring, cleaning and removing any irregularities, and enriching the data.

Then we transformed the data into intelligent estimations by using best-in-class estimation and machine learning algorithms developed by our team of leading data scientists and influencer marketing experts.

This report was made by HypeAuditor
HypeAuditor is an AI-powered Instagram and Youtube analytics tool that helps to get insights about the creator’s audience, increase advertisers’ ROI and safeguard authenticity in influencer marketing. It sets a standard for Instagram analytics by providing the most accurate data.

Want to partner with influencers who will be right for your brand?
Find the best creators with HypeAuditor Influencer Discovery and its 68.7M+ account database.